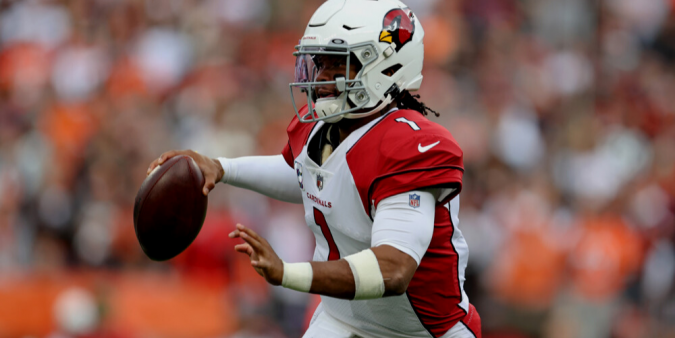 With the 2022-2023 NFL season drawing closer, online sportsbooks are adding more futures markets for users to bet on. One of those available markets is the 2022 NFL MVP award winner.

Let’s dive in and see what Kyler Murray’s 2022 NFL MVP odds are.

As of June 22, here are where the top four Arizona sportsbooks have Murray’s MVP odds set and where he ranks on each.

As we can see, three of the sportsbooks have Murray’s NFL MVP odds for 2022 at +2000. The odds at Caesars sportsbook are a touch longer at +2200 but are in the same area in terms of where he ranks among other players on each platform.

While not a massive difference, it’s always a good idea to do some line shopping to maximize your potential profits. Let’s say you were to place a $20 wager on Kyler Murray to win the MVP award. Using Caesars Sportsbook would net you a $40 higher potential payout compared to the other three books ($460 vs $420).

Disappointment in 2022? Cardinals’ season wins total as low as 8.5

Before we look at whether or not you should think about backing Murray as the 2022 NFL MVP, let’s see if history is in his favor or if he’s fighting an uphill battle.

All but four NFL MVP winners have been quarterbacks (includes nine straight from 2013 to 2021)
While the MVP award is meant to be a regular season award, all 19 have also made the playoffs
All but four offenses were top two in scoring
10/19 quarterbacks (52.6%) were top five in passing yards

The numbers above are clear: in order to have a shot at being considered the NFL’s most valuable player, a high-octane offense is a must. Last year, for reference, the Cards were right outside of the top 10 in scoring offense at 11th overall and were 25 points away from being a top-five scoring team.

Looking ahead to 2022, the elephant in the room is the looming DeAndre Hopkins suspension. Hopkins will miss the first six games of the season after violating the league’s performance-enhancing drug policy. This leaves newly-acquired Marquise Brown as the lead wide receiver after Christian Kirk signed with the Jacksonville Jaguars in free agency. Behind Brown is tight end Zach Ertz and aging wideout A.J. Green. It remains to be seen how second-year receiver Rondale Moore will be used, but he has the athleticism to make explosive plays if head coach Kliff Kingsbury can utilize him correctly.

Running back poses some questions in terms of depth. James Conner is the unquestioned starter but has yet to play a full season due to injuries. Behind him are two young, unproven players in rookie Keontay Ingram and second-year back Eno Benjamin. The Cardinals also added former Kansas City Chiefs running back Darrel Williams.

One last thing to pay attention to is what unfolds with starting center Rodney Hudson. Hudson did not report to June’s mandatory minicamp and would be a big hit to a unit that lacks depth at all spots across the offensive line.

The Case for Kyler Murray

While the Cardinals’ offensive outlook doesn’t paint a rosy picture, that kind of narrative would no doubt help Murray’s MVP quest. Murray has improved as a passer in each of his first three years in the league and his 14-game pace would have put him at over 4,500 passing yards and 29 passing touchdowns over a full 17-game season. If he can put up rushing numbers closer to his 2020 season (819 yards and 11 touchdowns), that would obviously go a long way to helping his case.

The one hurdle I think that will be hardest to overcome for Murray and the Cardinals is making the playoffs. As stated above, the Most Valuable Player is technically a regular season award, but all 19 quarterbacks who have been named NFL MVP since 2000 have made the postseason. Given the weakened NFC, however, Arizona could find itself as one of the last teams in.

My betting recommendation? Wait it out. The Cardinals open the 2022 season with games against the Chiefs, Las Vegas Raiders, and Los Angeles Rams. It’s possible they start the season 0-3 at which point Murray’s MVP odds would likely be pushed longer than the current +2200 Caesars is offering.