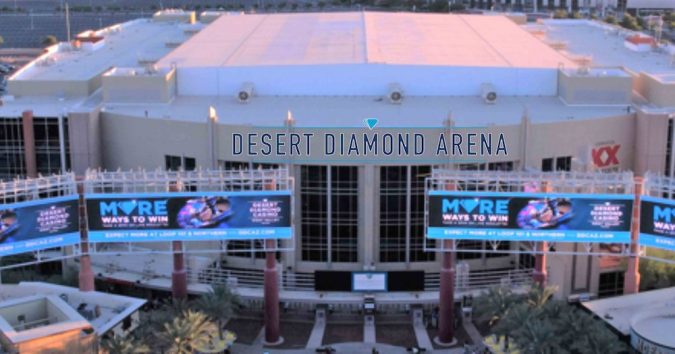 The Gila River Arena is no more. Owners ASM Global announced this week that the facility will be named Desert Diamond Arena under a 10-year naming-rights deal with Desert Diamond Casino.

Only three years after the Tohono O’odham Nation opened Desert Diamond Casino in Glendale, the tribe will have that name on the multi-purpose venue located smack dab in the heart of the Westgate Entertainment District and adjacent to the Arizona Cardinals State Farm Stadium. The financial terms of the naming-rights contract have not been disclosed.

BetMGM is in the middle of building a sportsbook at State Farm Stadium thanks to a partnership with the Arizona Cardinals. Bettors using the BetMGM can sign-up and claim up to a $1,000 risk-free bet.

The arena will possibly have the new name present on the building within the next two months. Located less than 15 miles from downtown Phoenix, the venue seats approximately 17,000 to 19,000, depending on the event. It has hosted basketball, ice hockey, and other sporting events such as the Ultimate Fighting Championship. Primarily, the facility has hosted music concerts, including Madonna, Justin Timberlake, and the Rolling Stones.

ASU’s Multi-Purpose Athletic Facility to be Named for Donors, Will Host Coyotes

That isn’t the only venue name making Arizona news. The new multi-purpose athletic venue on the campus of Arizona State University will be named Mullett Arena in honor of donors Donald ‘Donze’ Mullett and his wife Barbara, school administrators have announced.

Mullett Arena will have seating for 5,000 and serve as the home of ASU hockey, as well as the school’s gymnastics and wrestling programs. The cost of the facility was $140 million, with a sizable donation to the ice hockey program coming from the Mulletts, whose son Chris played for ASU.

The first event at the new Mullett Arena is scheduled for Oct. 14, when the Sun Devils host Colgate to begin their 2022-23 ice hockey season.

At least temporarily, the Arizona Coyotes of the National Hockey League will also play at Mullett Arena. The Coyotes announced a multi-year agreement with ASU in February that will see the team play its home games at the university’s new venue through the 2024-25 season, with an option to also do so in 2025-26.

The Coyotes previously played home games at Gila River Arena (now known as Desert Diamond Arena), but their lease expired at the conclusion of the 2021-22 season. Eventually, the team hopes to finance an arena of its own in Tempe. The 5,000-seat capacity at Mullett Arena will be the smallest in the NHL by far. The next-smallest is Canada Life Centre, home of the Winnipeg Jets, which seats 15,321, according to The Hockey News.

About Ice Hockey in Arizona

The Coyotes have made the NHL playoffs since 2012 and finished dead last in the 2021-22 season. The team finished 30th out of 32 NHL teams in average attendance last season, with 11,601 per game.

The Arizona Sun Devils boldly launched its NCAA Division-1 men’s ice hockey program for the 2015-16 season. The school plays as an independent and has already tasted a level of success when in 2019 the Sun Devils received an at-large bid to the NCAA tournament.