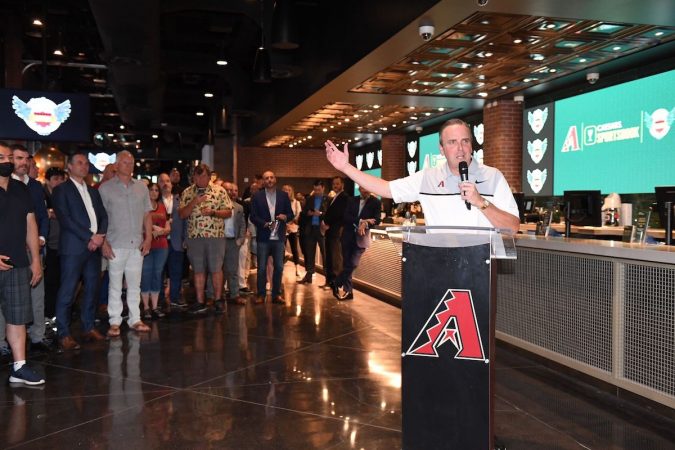 After months of waiting, the Caesars retail sportsbook has officially opened at Chase Field in Downtown Phoenix. Caesars’ partnership with the Arizona Diamondbacks was one of the first partnerships between a sportsbook and a major sports team in the state.

The grand opening of the two-story, 22,300-square-foot sportsbook occurred on Tuesday, June 21, and sits adjacent to the main entrance of Chase Field. This marks the largest sportsbook in the state to open since Arizona sports betting became legal last September.

Not only is the Caesars sportsbook at Chase Field the largest in Arizona, but it is also the nation’s largest retail sportsbook to open in partnership with a major sports stadium.

The sportsbook has a capacity of 425, complete with nine betting windows and 13 betting kiosks. Guests can enjoy wall-to-wall flat-screen televisions while sitting at plush lounge-style seats located on both stories. The venue also has patio space and the option to rent out private space.

Bloc9 Architecture partnered with Borisoff Design Studio to serve as architect on the sportsbook, and The Whiting-Turner Contracting Company was the general contractor. The venue is also home to Guy Fieri’s DTPHX Kitchen + Bar at Caesars Sportsbook. This is the first restaurant in Arizona by the celebrity chef and is led by Executive Chef Kayla Laasko.

The full-service restaurant features scratch-made food, signature and classic cocktails, and a beer and wine menu.

“We’re extremely proud to bring Caesars Sportsbook and Guy Fieri’s Kitchen + Bar to Chase Field and Downtown Phoenix,” Co-President of Caesars Digital Eric Hession said. “This destination provides sports bettors and non-sports bettors, locals, and visitors alike, with an experience they can’t find anywhere else. Thank you to the Arizona Diamondbacks and Guy Fieri for making this possible.”

Caesars sportsbook at Chase Field is now open every day of the week, even when the Diamondbacks do not have games. The sportsbook will have expanded hours during the football season.

The Diamondbacks started the season strong, but have started to decline and they are in fourth place in the NL West with a 32-39 record. There is plenty of baseball left to improve on that record. But after a solid May, the Diamondbacks have struggled, especially against one of the league’s best Los Angeles Dodgers.

It will be an NL West battle to round out June when the San Diego Padres come to Chase Field to take on the Diamondbacks in a 2-game series. Then the Diamondbacks will kick off July by facing another NL West rival — this time on the road — in a 3-game series against the Colorado Rockies.